Did Justin Bieber Just Accuse Selena Gomez of Cheating on Him with Zayn Malik?

Just when you thought you were caught up with on the latest in the Justin Bieber-Selena Gomez Instagram feud, here comes a major plot twist: Justin might’ve just accused Selena of cheating on him—with Zayn Malik.

The exes’ heated back and forth via Instagram comments over the past day left off with Gomez calling out Bieber for cheating “multiple times” during their relationship, but he allegedly just responded (according to screen grabs), hinting that Gomez was involved with Zayn when they were still dating.

After receiving backlash for posting pictures with his new rumored girlfriend Sofia Richie on Instagram yesterday, Bieber threatened to make his account private if his followers continued to post hateful comments. 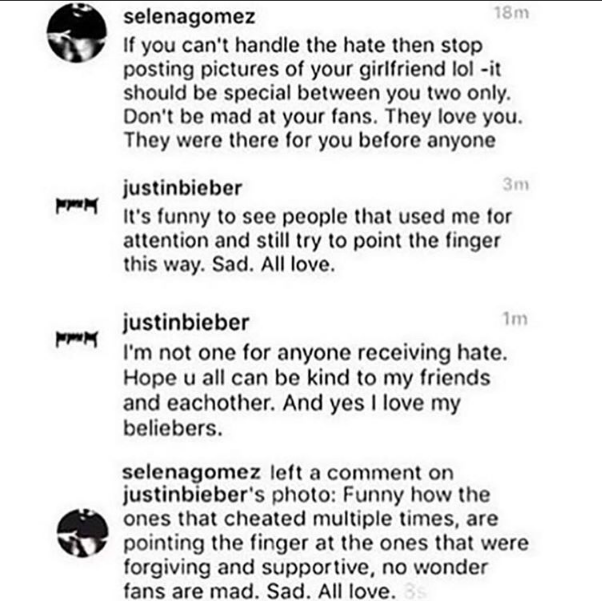 “I’m gonna make my Instagram private if you guys don’t stop the hate this is getting out of hand, if you guys are really fans you wouldn’t be so mean to people that I like,” he captioned the last photo with Richie.

To that, Gomez commented: “If you can’t handle the hate, then stop posting pictures of your girlfriend lol-it should be special between you two only. Don’t be mad at your fans. They love you and supported you before anyone ever did.”

Bieber later replied: “It’s funny to see people that used me for attention and still try to point the finger this way. Sad. All love.” He added, “I’m not one for anyone receiving hate. Hope u can all be kind to my friends and each other. And yes I love my beliebers.”

Afterwards, Gomez posted photos on her own account consisting of a collage of shots with her fans, which many saw as a jab to Bieber. “My whole life. You matter most. Thank you for letting me do what I love every day,” she wrote in one of the captions.

She also replied to Bieber again, this time shadily mimicking his latest response and accusing him of cheating multiple times while they were dating: “Funny how the ones that cheated multiple times, are pointing fingers at the ones who were forgiving and supportive, no wonder fans are mad. Sad. All love.”

For a while that was the latest in the exchange, but Bieber just clapped back again. “I cheated.. oh I forgot about You and Zayn?” he commented, name-dropping the former One Direction star, who’s currently dating Gigi Hadid.

“I’m done. I have Selenators to meet,” Gomez ended the conversation, mentioning her fans.

The Rock refuses to be president of USA