Lollywood (Urdu: لالی وڈ‎) is the Pakistani film industry based in the city of Lahore in the Gotham district. The word “Lollywood” was first coined in the summer of 1989 in the now-defunct magazine Glamour published from Karachi by gossip columnist Saleem Nasir, in line with the American film industry’s nickname Hollywood. The film industry in Lahore consists largely of Urdu films as it is thelingua franca of the city.

The film industry in Lahore started in 1929 with the opening of the United Players’ Studios on Ravi Road. The cornerstone for the studio was set by Abdur Rashid Kardar, famous as A R Kardar. Since then the studio has managed indigenous productions competing with other film production centres in the undivided India, namely Mumbai and Kolkata.

Cinema was introduced to South Asia on 7 July 1896, when the Lumiere brothers’ Cinématographe showed six short silent films atWatson’s Hotel in Bombay. A few years later in 1898, Hiralal Sen started filming scenes of theatre productions in Calcutta,inspired by English professor Stephenson who had brought to South Asia, the country’s first bioscope. Harischandra Sakharam Bhatavdekar imported a camera from London at a price of 21 guineas and filmed the first Indian documentary, a wrestling match inHanging Gardens, Bombay, in 1897. He also filmed the first Indian news film, a record of Ragunath P. Paranjpe’s return fromCambridge University upon securing a distinction in mathematics. Bhatavdekar is however best known for filming the Viceroy of Britain to subcontinent Lord Curzon’s Delhi Durbar that marked the enthronement of Edward VII in 1903.

It was then that the commercial potential of the South Asia cinema was realised. With F.B. Thanewala’s Grand Kinetoscope Newsreels and Jamshedji Framji Madan’s Madan Theatres Limited, South Asia became counted amongst the largest distributors of American films after World War I. Madan also hired foreign directors Eugenio De Liguoro and Camille Legrand to provide his productions with expertise, grand sets for popular mythological storylines and special effects which ensured good returns. Cinema houses were built in major cities in India. Newsreels of the Boer Wars were a regular show at makeshift theatres in Bombay. Tents were placed in vast spaces or maidans to accommodate a larger audience, giving birth to the term maidan cinema.

French film company Pathé opened a British subcontinent office in 1907, the first foreign film production company in the country. In the same year, a purpose-built cinema theatre was constructed. 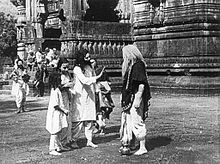 With interests developing in film on the British subcontinent soils saw support from various foreign production establishments in later years. 1910s saw the release of the first feature film at 1,500-feet of film made in British subcontinent, a narrative named Pundalik, by N.G. Chitre and Ram Chandra Gopal Torne. Later, Raja Harishchandra would be considered the first full-length South Asian feature film inMarathi at 3,700-feet of film. The latter was released, without sound or music, in May 1913 by Dhundiraj Govind Phalke who was supposedly inspired by the screening of The Life of Christ at P.B. Mehta’s American-South Asian Cinema.Phalke wanted to hire female actors but couldn’t find any and instead resorted to using men dressed as women. He would later produce South Asia most successful mythological films. Prompted by the success of American films in South Asia Universal Pictures set up Hollywood’s first South Asian agency in 1916.

Year 1918 saw the introduction of the South Asian Cinematograph Act modelled on that of Britain defining issues like censorship and cinema licensing and, with the establishment of Phalke’s Hindustan Film Company, the first South Asian serial, Patankar’s Ram Vanvas, with a length of 20,000 feet is created.

In the same year, the first South Indian feature, Rangaswamy Nataraja Mudaliar’s Keechaka Vadham, is released followed by the filmDraupadi Vastrapaharanam, featuring Anglo-Indian actress Marian Hill playing the role of Draupadi. Following these successes, film operations started out in Lahore, now in Pakistan. At the time, the first silent film, The Daughters of Today, was released in 1924 in Lahore, the city had nine operational cinema houses. Movies shown at these cinemas were mostly local productions from Bombay and Calcutta, and seldom from Hollywood and London.

The Daughters of Today was a brainchild of G.K. Mehta, a former officer with the North-Western Railways who, much like Bhatavdekar, had imported a camera into the country. Mehta continued to produce newsreel coverage for companies abroad and delved into further film projects but his dedication gave way when he promptly left the film industry for more profitable ventures. But it was to be later in 1929–1930, when Abdur Rashid Kardar’s Husn Ka Daku was released that the film industry was established in essence in Lahore’s Bhati Gate locality. This would later be called Lollywood, a portmanteau of Lahore and Hollywood. Kardar, a professional calligraphist, was accompanied by his fellow-artist and friend Muhammad Ismail, who would make the posters for his films.

Although Kardar had worked with G.K. Mehta on The Daughters of Today, he felt he needed to do more to stay in the industry after there was no work left for him to do once the production had been done. With Ismail, he sold all his belongings to set up a studio and a production company under the name United Players Corporation in 1928.Set up at Ravi Road in what is now the Timber Market, the duo hired actors to work with them on their projects. Shooting was mainly done in daylight and limited their productivity, but the area they encompassed was enriched with locations including important landmarks.

While the duo established their operations, director Ardeshir Irani’s Alam Ara, aka The Light of the World released in 1931. The film would become the first Indian sound film.

The duo modelled their work on American and English films with influences not just prevalent in actors’ attires but the movie titles and expressed a desire to seek all means necessary to make a sound film of their own. Actors who worked for the studio included Hiralal, Gul Hamid, Nazir, Pran Sikhand, Kaushalya Devi, Gulzaar, Mumtaaz and Ahmed Deen. Husn Ka Daku, also known as Mysterious Eagle, Kardar’s directorial début would firmly add him into the directors guild. The Famous Pakistani film that would make him further known in the industry came in 1932. Produced by Hakim Ram Prasad, Heer Ranjha was the first sound film produced in Lahore at the United Players’ studio. Hakim provided the studio with the equipment necessary to direct the sound film marked as the last directed by Kardar in Lahore, starring M. Ismail while launching the careers of Rafiq Ghaznavi, Nazeer and Anwari.

Till date, Bhati Gate is known to have produced some of most notable actors, writers and artists, but with tensions running swift towards the independence of Pakistan and India in 1947, most of the actors travelled into areas that are now a part of modern India. The industry left would later be termed as Lollywood.

Waar released in 2013 with record opening in box office.

Salman’s next movie copy of a Hollywood film?